Meticulously arranged shelves above the stove. Carefully packed crates under the bed. Maybe even an ultra-tall bookcase with an adjoining ladder if you’ve got the requisite ceiling heights.

Organization is key when fitting one’s life into a sub-500-square-foot space. It’s a challenge more metroareas renters are tackling these days as a coastal trend takes root among Denver’s rapidly proliferating apartment buildings . That trend is to go big on tiny.

Micro-apartments or, more accurately, buildings made up exclusively or featuring a high percentage of studio apartment units, are popping up around central Denver.

They appeal to renters who put more stock in location than square footage. They’re heavy on communal spaces and light on parking. They’re priced for people bringing in wages right around area median income or a little less.

And Front Range developers like McWhinney, the owner and operator of the Ride at RiNo “micro-studio” apartment building that opened at 3609 Wynkoop St. in late November, see big demand for micro in the future. 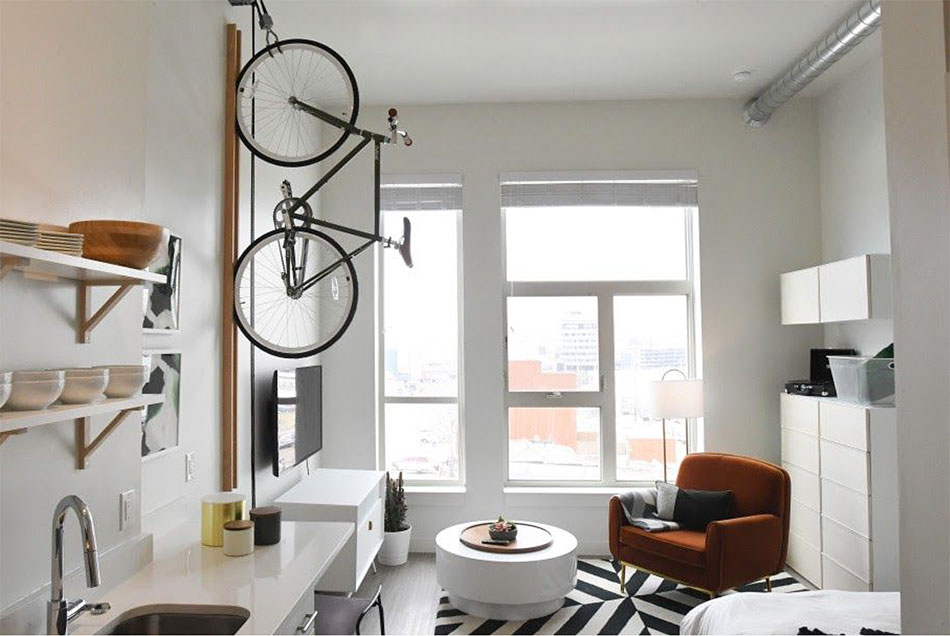 The RiDE at RiNo has units that range from 369 square feet up to 849 square feet in Denver. The community room has a view of downtown. Photo taken on March 12, 2019.

Ride sits on about three quarters of an acre just across the pedestrian bridge from RTD’s 38th and Blake Station rail stop. Its five stories house 84 apartments ranging from 369 square feet to 849-square-foot “live-work” studios. Rents start at $1,189 per month for the smallest floorplans.

As of last week, 37 leases had been signed there, keeping up with McWhinney’s expectations during the slow winter rental season. On a per-square-foot basis, the cost is comparable, even higher, than some nearby one-bedroom apartments. But when it comes to the total tenants have to shell out on the first of each month, most units in Ride roll in under the $1,456 average monthly rent the Apartment Association of Metro Denver was tracking at the end of 2018. That average includes rents for all types of units across seven counties in the Denver metro.

“Everyone talks about our missing middle,” David Jaudes, McWhinney’s vice president of multifamily development, said last week. That would be housing for people who can’t afford top-of-market luxury but earn too much to qualify for income-restricted rents at subsidized buildings. “(The Ride) really did prove out for us that smaller units at lower price points are really attractive and a lot of people are looking for those.” 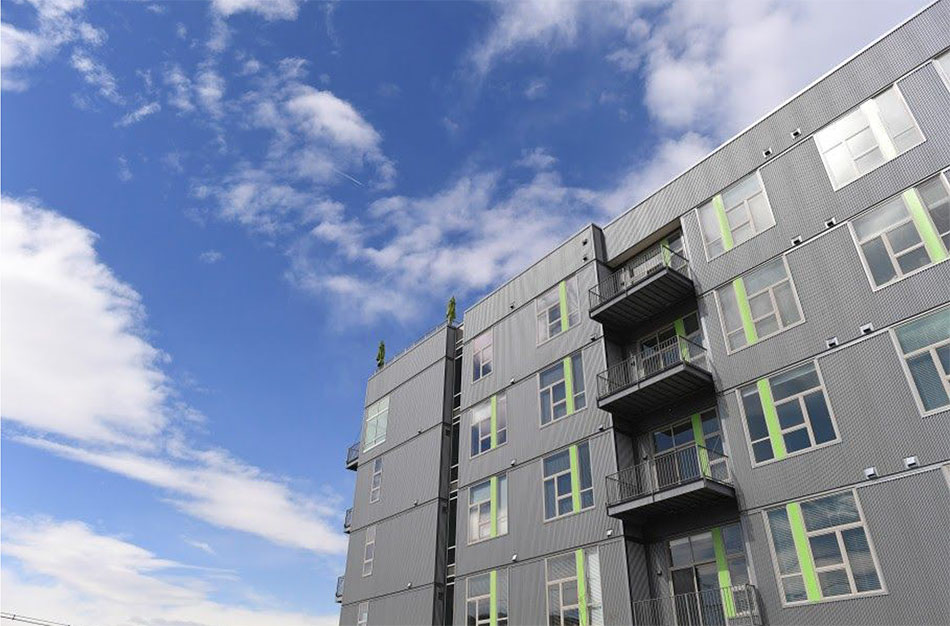 So far, Ride has been a great fit for tenant Raj Murphy. The 27-year-old moved to Denver on Jan. 28 to work as a paramedic serving crews working on the Denver International Airport concourse expansion project. He’s paying $1,375 per month for one of the larger (over 500 square feet) units at Ride. He likes the building’s high ceilings (12 to 18 feet) that allow for vertical storage, spacious common areas, including a “club room” with a vintage turntable, and proximity to rideable options.

“I take my car to and from work, and I don’t touch it on the weekends,” said Murphy. “I can grab a scooter, jump on the train. If you’re going to (Lower Highland) you just grab an Uber, and you’re there in five minutes.”

Murphy is one of eight tenants who have a car at Ride. That’s a good thing because the building has just 42 spots, including four dedicated to car2go rideshare cars and four more dedicated to parking for people with disabilities. The reduced amount of parking — allowed by the city thanks to the building’s proximity to transit and commitment to providing both car- and bike-share options — and the elimination of some costly amenities (namely, a heated pool), helped McWhinney control costs and provide cheaper rents to tenants, community manager Jesse Neal said. 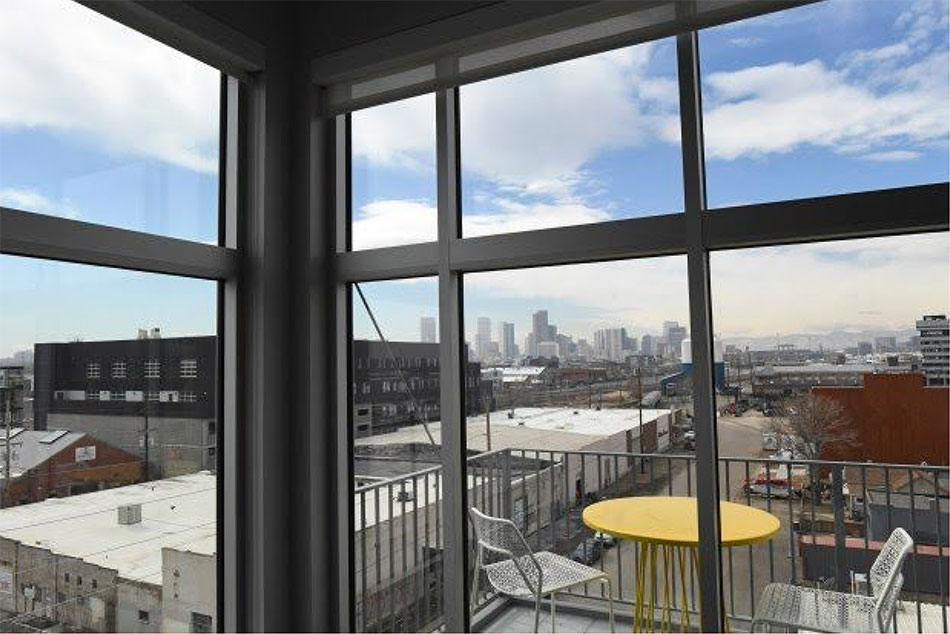 It’s not exclusively micro, but Continuum Partner’s mixed-use Market Station redevelopment project will bring 75 apartments under 500 square feet to downtown Denver after construction wraps next year, said Mark Falcone, Continuum’s founder and CEO. Rents are expected to be in the $1,200-per-month range. In a metro area where rents rose at the fourth fastest rate in the country earlier this decade — shooting up by 46.9 percent between 2010 and 2017 — even gentle price relief is sure to be welcome downtown.

“It’s still an expensive unit but it is within reach of somebody making $40,000 to $50,000 per year. That’s 60 to 70 percent of median income at that range,” Falcone said. “We don’t believe this is the be-all end-all of addressing our housing challenges. But we are learning a lot in this project about how to create more efficient square footage options and that’s part of the puzzle.” 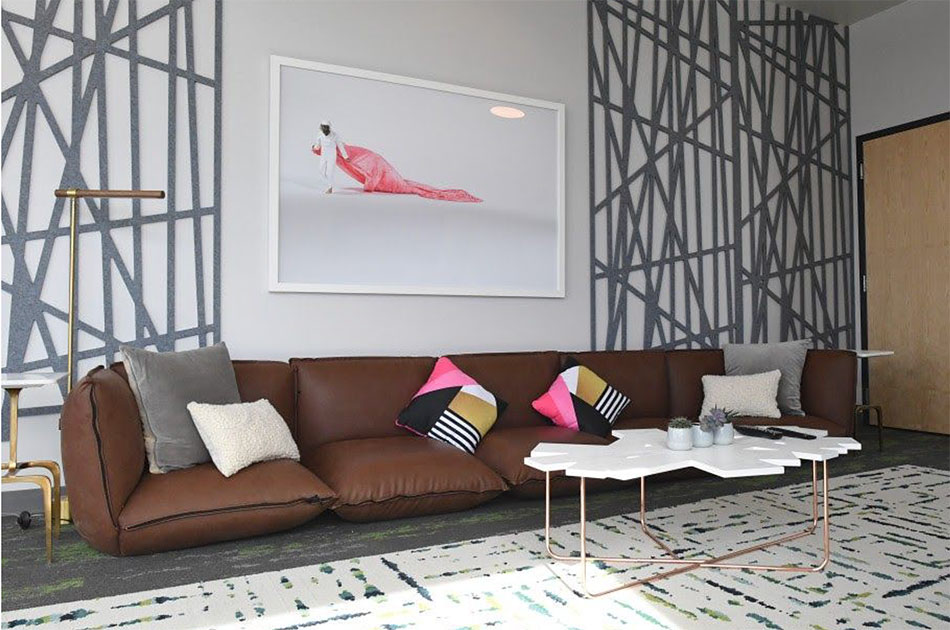 Denver is somewhat of a late arrival in the American micro-apartment movement. Coastal cities like Washington, D.C., or New York have been at it for some time, said Amy Groff, a senior vice president with the National Apartment Association. The average unit size in “micro” projects in those markets is between 250 and 350 square feet, she said. They are especially appealing to millennials, in Groff’s experience, the biggest demographic of renters today.

“They’re not interested in have a large living space. They don’t need a lot of stuff,” she said. “They just need the ability to cook a small meal, sleep, store some clothes, then they’re out and about. They’re busy people.”

There are homes for sale around Denver with master bedrooms that eclipse 450 square feet. But developers pinpointing and seeking to meet market demand for cheaper apartments by building smaller units mirrors a recent trend in Denver’s home sales. The average square footage of homes sold in the Denver metro area was 2,509 last month, down from 2,689 square feet in March 2018, according to real estate research firm Metrostudy. Major metro area developer Oakwood Homes last year rolled out smaller floorplan homes aimed at lower-income buyers. 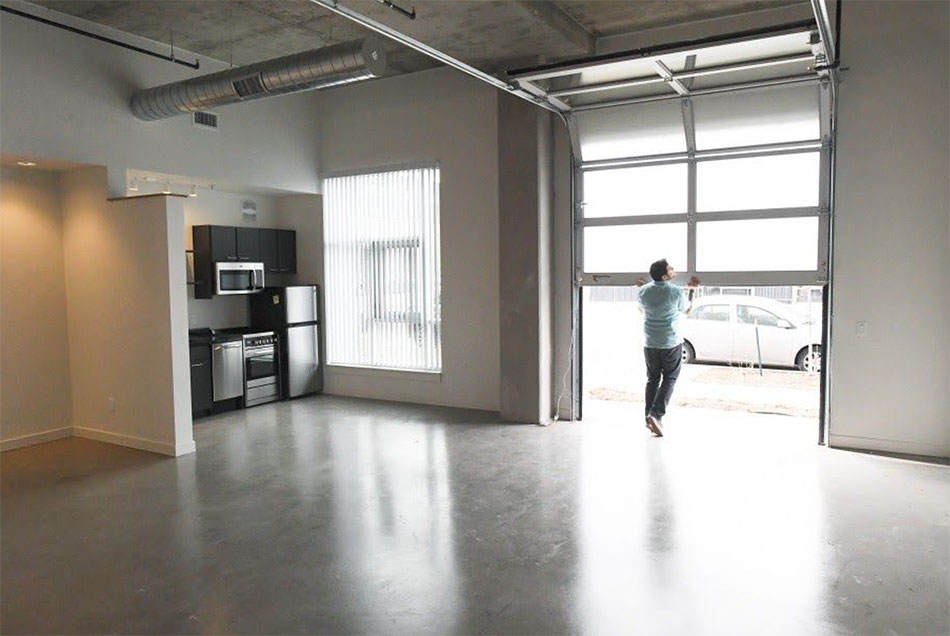 Chérie Talbert, CEO of the Home Builders Association of Metro Denver, has spotted the dual trends.
“Like homebuilders, who constantly are studying the market and their customers, the apartment
community has found that there’s a market for smaller apartments,” she wrote in an email.

Projects like Ride and Market Station make up just a sliver of Denver’s apartment landscape. There
were nearly 27,000 apartments under construction in the metro area at the end of 2018 with more than
25,000 more in the planning stages.

Even if developers don’t embrace building studio-exclusive projects, studio and micro units stand to
become a bigger part of the overall apartment picture. McWhinney’s buildings typically featured about 15
percent studio units prior to Ride being built. The company is looking to up that to 25 or 30 percent in
future buildings, Jaudes said.

Lance Gutsch, co-founder of development firm Pando Holdings, is an evangelist for micro-apartment projects in Denver. Pando’s two buildings at 1570 and 1578 Humboldt St., collectively known as the Economist, went on the market in September and last week, respectively. Eighty-nine of the 97 units are studios. They range from 288 to 380 square feet with rents running from $985 to $1,370 per month.

The project caused a stir among City Park West neighbors because it had no on-site parking. Pando leases a surface lot with 43 spaces nearby. But six months on and with 43 percent of the units leased, the Economist and its residents have brought just five cars to the neighborhood, Gutsch said. He’s now planning to build a 12-story building near Union Station that also would offer no on-site parking. Garages are among the most expensive elements of multifamily building. Skipping building an underground garage or parking pedestal means developers can pass savings on to tenants or invest in other things like enhanced architectural design.

“People are after attainable housing and to the extent you can deliver it in the core of the city, especially where there are jobs and no need for a car, we absolutely need more of it,” Gutsch said. 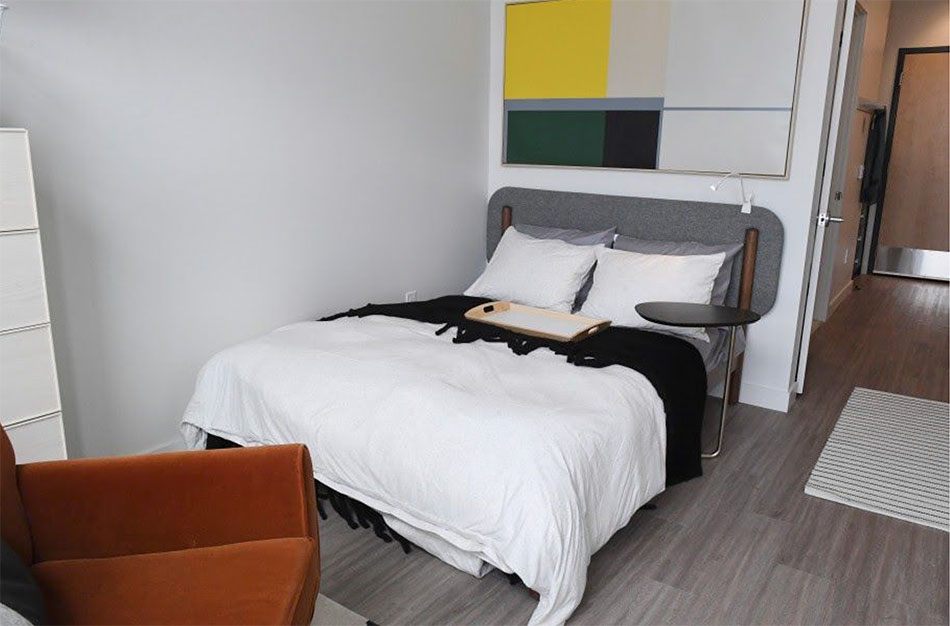